So for those of you who know I am part of the huge La La Land fan club, over these past few weeks after their 14 nomination announcement for the Oscars I’ve been awaiting the red carpet event. Sadly I wasn’t prepared to stay up till 12 in the morning to watch the awards and so sleep got the better of me, I did however catch up on all the glory this morning.

My first Google search this morning (which is normally the weather forecast even though I have the app on my phone ) was La La Land Oscars Winners and sadly as I counted their awards, they had only won 6 out of their highly talked about 14. Now, I don’t believe they should have won all 14 awards but come on Ryan Gosling for Best Actor! He was so brilliant in that movie, learning to play piano just for the role and believe me for those of you who haven’t watched the film, he’s a fantastic pianist. However I did not watch Manchester By The Sea so I guess I can’t really criticise Casey Affleck.

But then there is my favourite part of the Oscars 2017, where I became so hyped and excited to hear the announcement that La La Land had won best picture when actually there was just a huge error. Half way through the speech from the La La Land director, the mistake was realised and Moonlight was awarded the best picture. In all honesty I am n0t really that disappointed, I have not watched Moonlight yet but something in me when I saw the audience hear the truth and the excitement from the actresses and actors I knew that Moonlight was deserving. I would have loved La La Land to win but there is definitely a reason that Moonlight won last night and hopefully this weekend I’ll stream it and know why.

It’s the first year I’ve ever felt so emotionally invested in the awards ceremony but that’s because we have some phenomenal films this year. I’m just glad that the gorgeous, talented and one of my favourite actresses Emma Stone won best actress and the ever delightful Damien Chazelle won best director.

But of course how can we not talk about fashion at the Oscars so here is my top 5 looks for last night. 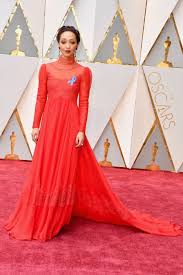 She was a depiction of fiery royalty, she looked gorgeous in this lace gown that was an absolute showstopper. Nega was nominated for Best Actress in her role in Loving and captivated everyones attention in this gown by Valentino.

The 50 Shades star looked breathtaking in a gold silk Gucci gown with an ethereal glow in this victorian inspired piece. The dress had an incredible fit that really accentuated her waist and just flowed off her silhouette.

I couldn’t resist adding this look in, Stone could have walked off of the set of La La Land in this timeless gown. It’s simple and yet so perfect, Stone does it again with her elegance and charm in this golden Givenchy dress. 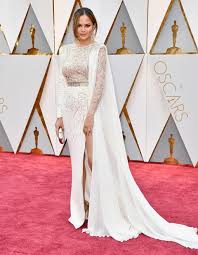 She’s definitely one of the sexiest women but Teigen in this dress is just wow. She’s dressed in a white Zuhair Murad gown (one of my favourite couture designers), exposing the perfect amount of leg and she looks just as beautiful as ever.

Although her dress may be quite sheer, I simply love this gown. It’s a breathtaking piece with gorgeous details and the trail is just beautiful. It’s a pretty, soft dress that has this lovely flow to it but with a hint of an attitude. Steinfield attended the Oscars in a Ralph and Russo gown.